Fifty-six men signed the Declaration of Independence in 1776.  Of those 56, five represented the state of New Jersey.  Those men - Abraham Clark, John Hart, Francis Hopkinson, Richard Stockton and John Witherspoon - did not live nearly long enough thereafter to witness the creation of the country which their declaration had made possible.  The following sketches of their lives are meant to be brief; much of the information gathered for their presentation was found in sources which pre-date the Civil War (the more recent publications simply take from these eariler publications as well).  The sketches are by no means comprehensive, but they are a composition of the information obtained from earlier sources and arranged together in a single location. 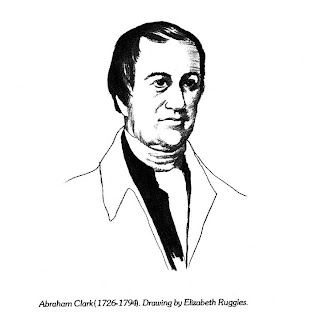 from Cunningham's book
Abraham Clark was born in Elizabethtown, New Jersey (present-day Roselle) on 15 February 1726, the only child of Thomas Clark and Hannah Winans.  He grew up on his father’s farm, becoming a surveyor and a lawyer (though he was never formally trained or accepted as the latter).[i]  Clark married Sarah Hatfield (also spelled Hetfield) in 1748 and fathered ten children over the course of their marriage.  Two of Clark’s sons, Aaron (1750 - 1811) and Thomas (c. 1755 - 1789), served the Patriot cause during the war.[ii]
Clark held the office of sheriff of Essex County (among others) under the royal government, but around the year 1774 he became openly defiant against the British.  Because of his patriotic zeal, he was elected as a member of the First Provincial Congress of New Jersey in May 1775.  Clark was also elected to serve New Jersey at the Continental Congress meeting in Philadelphia.  After signing the Declaration of Independence while serving in the latter Congress, Clark wrote to his friend, Colonel Elias Dayton, “It is gone so far that we must now be a free independent State, or a Conquered Country.”[iii]
Clark had no intentions to be conquered, though.  He served the Continental Congress until 1778, and returned from 1780 - 1783 and 1786 - 1788.  In between, he served in the New Jersey State Legislature.  In 1786, before leaving the State Legislature, Clark, who was a slave-owner, sponsored a bill titled “An Act to prevent the Importation of Slaves . . . , and to authorize the Manumission of them under certain Restrictions and to prevent the Abuse of Slaves.”  Though the bill passed, Clark’s slaves were only freed upon his wife’s death in 1804.[iv]
Clark was one of only 12 men to attend the Annapolis Convention, where he again represented New Jersey.  Although the men only met from 11 - 14 September 1786, they called for all of the states to be represented in a meeting to be held in May in Philadelphia.  This resulted in the Convention which drew up the U.S. Constitution.  Clark was elected to the New Jersey Convention to the Constitution, but did not attend due to ill health.[v]  Clark was opposed to the U.S. Constitution until a Bill of Rights was added.  He was elected to the Second and Third Congresses, serving until his death (from sun stroke) on 15 September 1794.  His obituary, which appeared in the 17 September issue of the New-Jersey Journal read, in part:
On Monday last, very suddenly, the Hon. Abraham Clark, Esq. member from this State, to the Congress of the United States, in the 69th year of his age. In the death of Mr. Clark, his Family has sustained an irretrievable loss, and the state is deprived of a useful citizen, who, for forty years past, has been employed in the most honorable and confidential trusts, which he ever discharged with that disinterestedness, ability, and indefatigable industry, that redounded much to his popularity.
Clark was buried in Rahway Cemetery in Rahway, New Jersey.  His stone reads:
Firm and decided as a Patriot
Zealous & faithful as a servant to the public
He loved his country & adhered to her cause
in the darkest hours of her struggles
against oppression
The graves markers of Abraham Clark (r.) and his wife, Sarah (l.) in Rahway Cemetery in Rahway, New Jersey.
Photo by: Dan Silva
[i] Cunningham, John T.  Five Who Signed.  Trenton: NJ Historical Commission, 1975; 18.
[ii] Both sons served in General Henry Knox’s Artillery Regiment under Captain Daniel Neil’s Eastern Company, New Jersey Artillery.   Both men mostly likely served in the Battles of Trenton and Princeton.  Thomas spent time as a prisoner aboard the retched prison ship Jersey.
Descendants of the Signers of the Declaration of Independence (DSDI), “Abraham Clark.”
[iii] Ibid.
[iv] Clark and his wife owned three slaves.  Ibid.
[v] Lossing, Benson J. Biographical Sketches of the Signers of the Declaration of American Independence.  New York: Derby & Jackson, 1859; 192.
﻿
﻿
Posted by Dan at 2/13/2012 10:59:00 PM